We want to wish you and your loved ones a Happy Thanksgiving! Check Your Cart For Black Friday Promotion Our commemorative chalkware Santa pays tribute to that enduring author whose passion as a champion of the poor and under-privileged was unparalleled. His writings are still relevant to this day for those ideals. Charles Dickens first novel, The Posthumous Papers of the Pickwick Club, published in 1836-37 set him on the road to fame. Our Santa’s coat is made from a photo transfer of the 1880 fabric based on the figurative motifs on printed patchwork popular in the fourth quarter of the nineteenth century. Growing audiences for cultural entertainment mirrored American book publishing as towns’ hosted local and touring performers. The Chicago Art Institute, Winterthur Museum, and the American Textile History Museum all have fragments of this original fabric printed in 1880 by the Cocheco Manufacturing Company in Dover, NH. Attesting to the enduring popularity of Dickens’ Pickwick Papers as three illustrations from this book are the featured motifs, some 50 years after its publication.

Vaillancourt Folk Art recognizes the profound impact that Charles Dickens had upon America’s most popular holiday with his little book, A Christmas Carol. To be part of the worldwide celebration of Dickens 200th anniversary of his birth, we have played a part in returning a Dickens to Worcester’s Mechanics Hall. Which is one of just a few remaining original venues in which Charles performed his readings in his American Tour in 1867-68. On March 21st of 1868 Charles stood upon the stage of the then 11 year old hall, in his mid-50s and presented his dramatic reading of A Christmas Carol to a sold out audience of 1500 people, attesting to his rock star status of the day.

The remaining three books located in the sack can be found in Worcester’s WPI, George C. Gordon Library which houses, an amazing yet little known, Dickens collection donated by Robert D. Fellman. Original monthly parts of seven of his novels as well as bound first editions are part of this collection. Also the 1867 set of Dickens Works, which was printed by Ticknor and Fields of Boston with new illustrations approved by Charles himself, to be sold in conjunction with his American reading tour. Certainly not complete without A Christmas Carol, which Charles also designed, bound in a red cloth with gold embossed cover and gilt-edged pages. Finally an image of either Mechanics Hall, or the Harpers weekly portrait of Dickens at his writing desk is available in the frame hanging next to the sack. 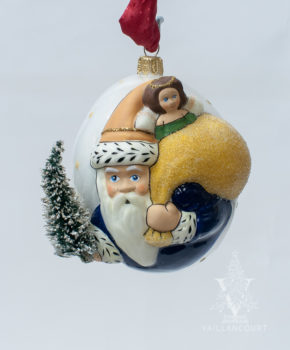